Welcome to BABYLON GAY SPA MASSAGE, a luxury massage lounge that offers the most beautiful relaxing atmosphere in Warsaw. 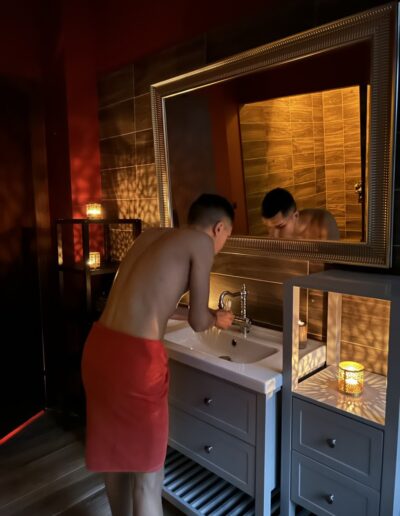 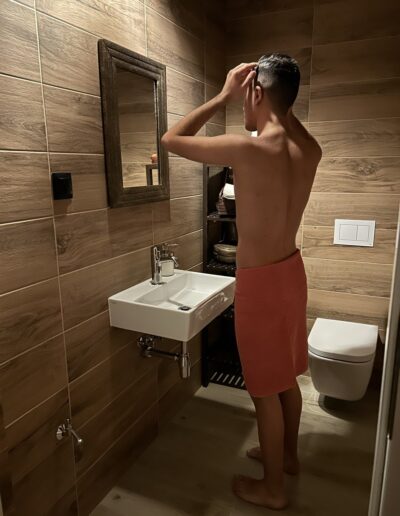 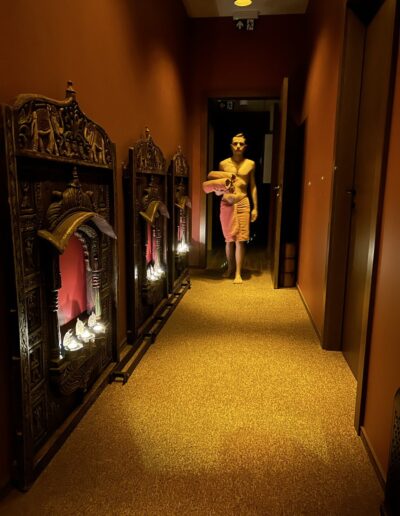 Babylon Gay Spa Massage is a kind of haven of harmony, relaxing environment filled with discreet yet exciting aromas. In this special way our guest switches over, exchanging the tense reality of his life for the slow-moving and pleasant reality of the room, where he experiences physical and mental pleasure. Lingam massage performed by our masseurs is much more exciting than the usual penetration.

Such a massage brings not only a lot of pleasure, but also contributes to the development of sexual potential, the awakening of sexual energy and its release. Increases sensitivity and efficiency
sexual.

Regardless of age and sexual experience, it is a fantastic idea to relax after a hard week. It enriches sex life and strengthens relationships. During its performance, not only the process of awakening sexual energy plays a huge role. During the massage, a person also begins to understand and feel himself better and learns to communicate, make contact not at the level of words, but at the level of feelings, impressions, emotions, touch and glances.

The definition of GAY SPA MASSAGE as “European” is due to historical factors and its greatest prevalence and popularity in Europe and America.

GAY SPA MASSAGE is very useful for sleep disorders, overwork, stress, headaches and heart pain, physical stress. Ultimately, the main goal of GAY SPA MASSAGE is to relax the body. That is why the priority massage area here is masaż lingam, which, when exposed to it, can achieve a relaxing effect.

The classic GAY SPA MASSAGE is divided into several subspecies, sometimes significantly different from each other, but they are based on the same techniques.

Stroking the lingam is a manipulation in which the hand slides over the surface of the skin with varying pressure, but does not shift it into folds. It is used to improve the respiratory and secretory functions of the skin, which at the same time becomes smooth and elastic.

Rubbing the lingam is a manipulation in which the hand does not slide over the skin, but mixes it, produces shifting and stretching in various directions. It is used to loosen and crush pathological formations in various layers of tissues and increase the ability of muscles to contract. Vigorous rubbing along the nerve trunks and at the site of the nerve endings causes a decrease in nervous excitability.

Kneading lingam (transverse and longitudinal) – this technique combines a series of movements that are very reminiscent of kneading dough. Each muscle group or individual muscle is alternately kneaded, which helps to increase the contractile function of the muscles, increase the elasticity of the ligaments, and increase blood and lymph circulation.

The vibration of the lingam is a quick and energetic movement made by relaxed hands, which are also called shock. These include patting, tapping and chopping. Depending on the frequency and amplitude of the vibration, the vessels expand or contract, the secretory activity of individual organs changes, muscle tone increases, sagging skin becomes stronger, and tissues become elastic.

Drainage massage lingam is a kind of classical massage. It is aimed at restoring and accelerating blood and lymph circulation in damaged tissues during injuries, diseases of the musculoskeletal system, varicose veins, after surgical interventions. The movements of the massage therapist’s hands should be sliding, smooth, soft.

Classical massage techniques such as patting, tapping and chopping are excluded (even on healthy tissues). Depending on the strength and methods of influencing the muscles of the massaged, there are three main types of European massage: Swedish, Finnish and Russian.

Swedish (hygienic) lingam massage. Swedish massage is based on the principles of ancient Roman and ancient Greek massage. At present, its feature is sparing, superficial, not disturbing muscles of touch and stroking. The emphasis in this massage is on the use of certain cosmetics that accompany the procedure.
This massage is performed to improve health. It is used in three forms: general (the entire surface of the body is massaged in a strict sequence: back, back of the legs, abdomen and chest, scalp), private or segmental (impact on certain parts of the body) and self-massage. It is best to conduct sessions in the morning: this contributes to the transition of the body from a state of sleep to wakefulness.

Finnish lingam massage. Finnish therapeutic massage has a smaller arsenal of techniques, among which kneading with the thumb pad is preferred. This method is very labor intensive and thorough. However, due to its low penetrating power, this type of massage has limitations: as a rule, it is used at the locations of small muscles that are tightly attached to the bone tissue. Finnish massage cannot be called universal, but its effect on the joints and the spine area can be truly miraculous.

Polish lingam massage. The purpose of the Polish massage is to strengthen the muscles, restore the nervous and respiratory systems, combat sleep disorders. It is done with a deep study of the muscles and is accompanied by tangible touches of the massage therapist, which are sometimes painful. That is why, after the first two or three procedures, muscles can hurt, which is associated with the process of their release from accumulated toxins. However, after a short period of time, the muscles get used to such an effect and after 4-5 procedures they stop hurting. It must be borne in mind that inept exposure at such an intensity can cause irreparable harm to health. 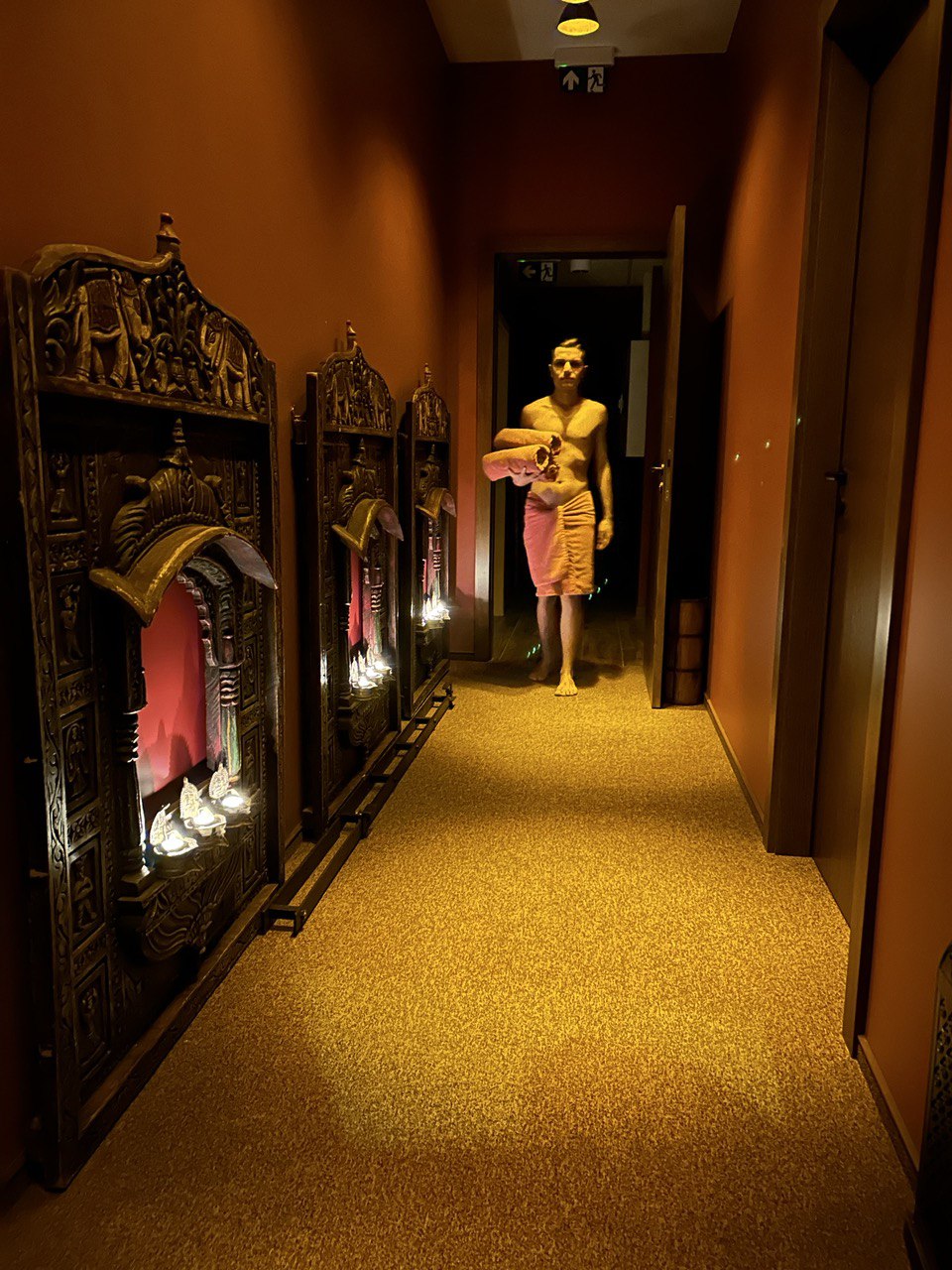